How LeBron James, Russell Westbrook and Darvin Ham are all contributing to Lakers’ late-game offensive woes 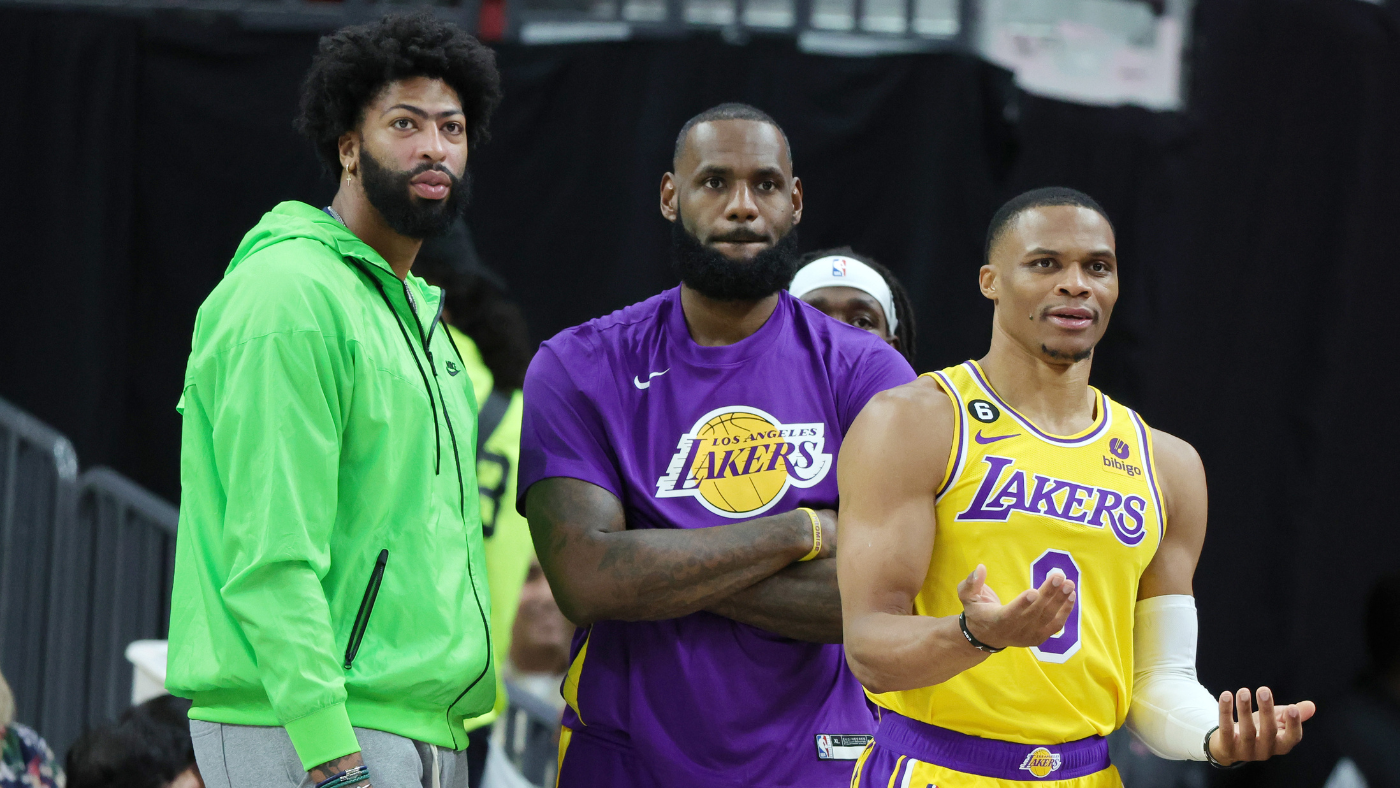 LeBron James is on the shortlist of players you’d most want to give the ball to on a critical possession late in a key game. Trailing by three with roughly 50 seconds remaining in Wednesday’s loss to the Sacramento Kings, the Los Angeles Lakers managed to do just that. What followed was a sequence that is growing far too familiar to Lakers fans.

James used a screen from Kendrick Nunn to build a head of steam and rampage toward the basket. Three Kings defenders awaited him there. He nearly went up after a spin move, but with no space to operate and finding little breathing room while working off of his pivot foot, he passed the ball back out, demanded it back behind the arc, and fired and ill-fated 3-pointer. Miss.

The sequence didn’t cost the Lakers the game. Still, it was the latest in a string of recent offensive misadventures that have held an otherwise strong Lakers team below .500. They scored just 10 points in the final seven minutes against Sacramento. They managed just 14 points across two overtimes against Dallas a week ago, and Russell Westbrook’s disastrous final possession was the difference against Philadelphia on Sunday. The Lakers rank 23rd in the NBA in clutch net rating at minus-9.8, and while their raw offensive numbers are better, things get a bit uglier once you look under the hood. With the scoring margin at five or lower, the Lakers have attempted 26 shots in the final minute this season. They’ve made only six of them, according to Stathead.

Offensive collapses against Sacramento and Dallas. Double-digit blown leads against Boston and Indiana. Disastrous final possessions are scattered throughout the season. However, the 20-25 Lakers are only 2.5 games out of the No. 6 seed in the Western Conference. In such a tightly packed playoff field, these close-game meltdowns might be the difference between the postseason and the lottery. So what are the Lakers doing in these final moments that often lead to disappointment?

The decline has been subtle. The raw numbers suggest that it isn’t even there. After all, it’d be hard for a washed king to flirt with 30 points per game, right? No, if you want to pluck a few gray hairs, you’re gonna have to dive a bit deeper. James is averaging only 3.6 isolation points per game, the lowest figure since tracking began in 2016. He’s not at quite a career-low in pick-and-roll, but he’s seen a significant decline over the past three seasons.

LeBron finds his points in less burdensome ways now. It’s his 20th season and he’s somehow on pace to match his career high with a league-leading 6.2 fast break points per game. Only 31.2 percent of his shots are coming from within three feet of the rim, one of the lower figures of his career, but he’s attempted to balance that out with 7.5 3-point attempts per game over the past two seasons. For most of the game, this approach works out just fine. James isn’t the individual shot-creator he once was, but he’s still better than almost anyone else, and he manufactures his own offense elsewhere.

But late in the game, when things slow down and those easier sources of offense are gone? That’s when you start to see a lot more of this.

A lot of pounding the rock. Maybe there’s a screen and maybe there isn’t. James settles for an ugly jumper, just as he did against the Kings. This isn’t exactly a recipe for success. James has made three shots in the final minute of games with a margin of five points or less this season. All three were 2-pointers. He’s missed eight such shots this season. Five of them have been 3-pointers.

The Lakers, as a team, rank 29th in the NBA in 3-point attempts per game… but are tied for 13th in 3-point attempts per clutch game. Their offense, which thrives on pace and in the paint for most of the game, turns into a brick factory when it counts. James can’t quite create the sort of looks he once did, and if he can’t generate advantages late, his teammates don’t have better options than those same ugly jumpers. Of course, James might have an easier time generating advantages without one of his most prominent teammates.

Russell probably should be on the Benchbrook

An important distinction needs to be drawn between “first three quarters Russell Westbrook” and “fourth quarter Russell Westbrook.” For 36 minutes, Westbrook is a flawed but extremely useful player. His playmaking generates most of the baskets scored by the Lakers’ big men. He generates pace and pressures the rim against unprepared bench units. The fit isn’t ideal, but Westbrook has found ways to justify his place on the Lakers for the better part of most games.

But Westbrook shouldn’t play late in games. The numbers are so ridiculous that they almost look fake. The Lakers are minus-33 in the 293 fourth-quarter minutes Westbrook has played and plus-83 in the 247 fourth-quarter minutes they’ve played without him. This data is not skewed by a few bad lineups. It’s exclusively for Westbrook. The only other Laker with a negative point-differential in fourth quarters is Wenyen Gabriel (at a paltry minus-4). He’s shooting 35.1 percent in the clutch this season yet he’s taken the second-most clutch shots on the team (37). He’s made only one of those “final minute with a margin of five points or fewer” shots… but he’s missed two layups in that setting.

The eye test here is just as damning. Pick a Lakers collapse and you can probably find Westbrook’s fingerprints. Sunday’s final possession against Philadelphia speaks for itself.

Go all the way back to their first late-game loss of the season and you’ll find Westbrook’s bizarre two-for-one attempt despite the Lakers having the lead.

The bad plays aren’t even the worst part. Go back and watch that first clip from Wednesday’s Kings game. The third defender waiting for James at the rim? It’s Harrison Barnes, who was nominally guarding Westbrook in the corner. Of course, he wasn’t actually guarding Westbrook, because teams are happy to concede jumpers to one of the league’s worst shooters. Perhaps James could get to the rim more consistently late in the game if Westbrook didn’t ruin the court’s spacing for him. This brings us to our third offender.

Thanks for signing up!

Keep an eye on your inbox.

There was an error processing your subscription.

It’s hard to blame Westbrook for being Westbrook. He’s a 15-year veteran with clearly defined strengths and weaknesses. He is who he is. It’s clear to everyone involved why his presence is detrimental late in games. But he’s not the person who decides who plays. Ultimately, that responsibility is Darvin Ham’s.

Ham is walking a fine line here. Getting Westbrook to accept a bench role at all was somewhat remarkable given the way last season played out. We don’t know what went into those conversations. If Westbrook was promised the right to earn late-game minutes based on his early-game performance, the matter grows even more delicate. Westbrook, by almost any measure, is playing well early in games. Would Ham lose Westbrook’s buy-in if he benched him late? Is that a risk worth taking?

The politics of a locker room are complicated. Ham is navigating them for the first time in his head-coaching debut, and there have been hiccups in just about every component of his late-game management. Here’s an especially deceptive stat: the Lakers have the fewest clutch turnovers in the NBA. On the surface, that’s a good thing. What it actually represents is how little passing the Lakers do late in games. They almost always get a shot up. That shot is, as we’ve covered, almost always a jumper coming from a bad shooter.

It would help if the Lakers had better shooters. Of course, it’s not as though Ham has always used the ones he’s had. Remember Matt Ryan’s game-tying 3-pointer at the buzzer against New Orleans early in the season? Well, eight seconds earlier, the Lakers ran a different play down three points. Lonnie Walker IV missed. Ryan wasn’t even on the floor. The Lakers needed two missed free throws from Dyson Daniels to even have a chance at the tie.

Mistakes like that aren’t exclusive to first-year head coaches. Gregg Popovich took Tim Duncan out of the final regulation play of Game 6 of the 2013 NBA Finals and we all remember how that went. But all of these factors have added up to give Ham real problems late in games. He’s learning how to do this on the fly, and he’ll theoretically get better with time, but it’s ultimately a coach’s responsibility to manage these situations. It’s on him to put the right players on the floor and it’s on him to design an offense for these situations more intricate than hoping James or Westbrook can create a good look on their own.

END_OF_DOCUMENT_TOKEN_TO_BE_REPLACED

Russell Westbrook shouldn’t be the Sixth Man of the Year favorite, but he creates betting value on the award

END_OF_DOCUMENT_TOKEN_TO_BE_REPLACED

LeBron James scoring tracker: Lakers star less than 120 points away from record, but will sit Monday vs. Nets